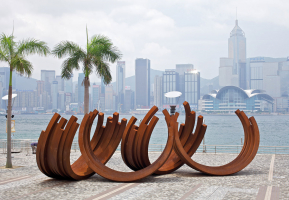 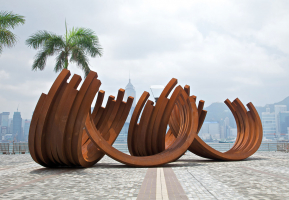 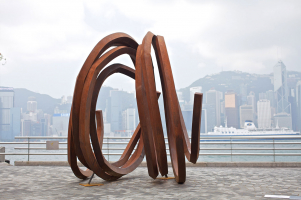 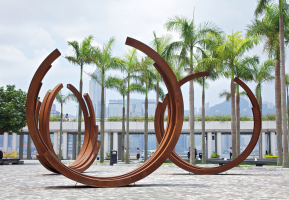 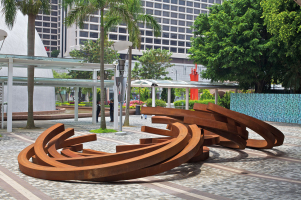 de Sarthe Gallery is pleased to announce his first collaboration with the French May presenting 7 monumental sculptures by Bernar Venet.

Back in Hong Kong after his last appearance in 1995, the French artist Bernar Venet is invited to exhibit along the Hong Kong bay, near the Cultural Centre and the Museum of Arts, several monumental works he created for his Versailles exhibition which took place in 2011. Questioning the relationships between art, landscapes and architecture with his corten steel Arcs and Indeterminate lines, we are told the artist’s visual story, the story about his path from conceptual art to public art, about how his installations and monumental sculptures have made a lasting mark on the contemporary aesthetic landscape.

Bernar Venet began his career in 1961 when he coated canvas with tar and exhibited a mere pile of coal as a sculpture. After moving to New York in 1966, he discovered minimal art and applied its tenets to his own work, creating blueprints of tubes and reproducing mathematical drawings solely for their scientific meaning. In 1976, he continued his work with mathematical formulae again, but this time his paintings and sculptures took a formalist turn. He distilled the notion that randomness is mathematical into a series of Indeterminate Line sculptures, “doodling” them with no particular aesthetic agenda or predefined pattern. Then he moved on to sculptures comprised of segments of circles – Arcs - of varying lengths, the degrees of which both define and compose them. There is something striking about Bernar Venet’s corten steel arcs, both in their materiality and in the way in which they provide meaning for their surroundings. The line in all its variants – arcs, leaning arcs, vertical arcs, collapsed arcs and indeterminate lines, oblique lines… – compose Venet’s vocabulary, which he uses to broach the issues that sculptures must address, namely the relationship with the body, with equilibrium, and with the environment.