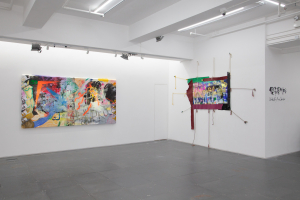 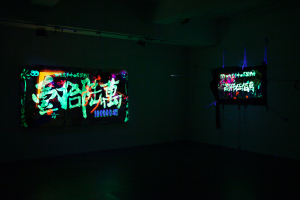 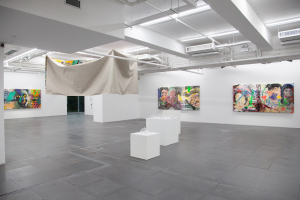 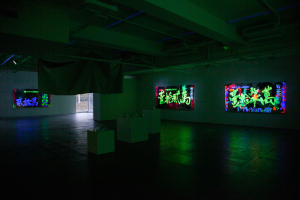 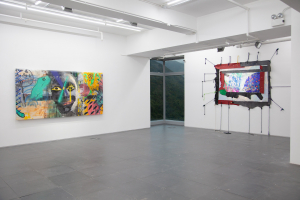 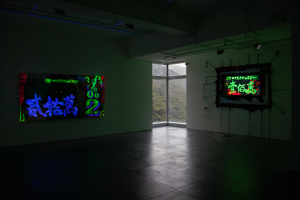 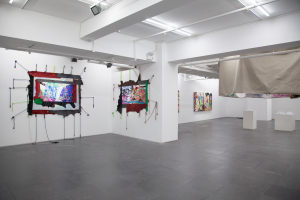 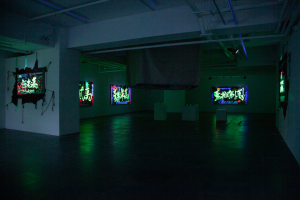 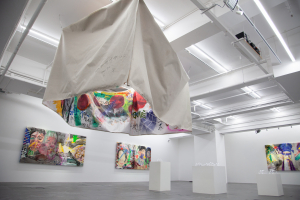 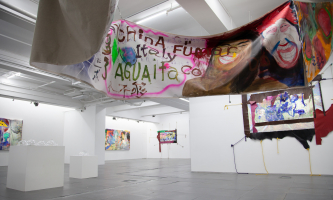 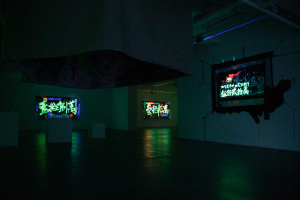 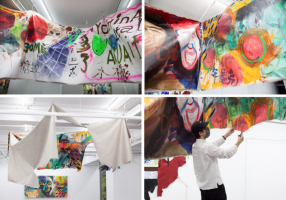 Prominently featured in the exhibition is double love & flied currency (2020), which is comprised of two and three-dimensional paintings that were formerly one continuous 33-meter-long artwork. Some of the paintings in the series are affixed directly onto the wall, while others are stretched over slanted protrusions extending into the gallery space. At first glance, the artworks' loosely collaged compositions depict gestural illustrations of faces, text, and symbols. However, as the gallery lights turn off at intermittent intervals, ultraviolet lights abruptly replace them, illuminating an additional, normally unseen layer within the artworks. The black lights reveal that the paintings are themselves bank notes, issued by Double Fly Art Center's Double Fly Awkward Pay Banking Branch and the amount of these bank notes corresponds to the actual price of the artworks. Further, the prices vary significantly while the artworks remain the same size, leveling a comment on the nature of the art market, society's perception of value, and the role of art as a financial instrument.

Additionally, accompanying the shift in lights is an ominous, low frequency soundtrack that plays throughout the gallery as the black lights are turned on. When the standard gallery lights return, the soundtrack fades away and a video piece titled Double Fly, Same Style starts to play.

Double Fly Cut Piece (2020) is described by the artists as the “conjoined twin” of double love & flied currency. Here, Double Fly displays the remaining length of canvas from the previously mentioned 33-meter-long artwork, alongside instructional text, QR codes, and various sized scissors. Guests may read through the instructions and should they choose, can engage in the artwork. To participate, visitors must make a donation (as little as HK$ 1 is accepted) and then use one of the scissors--which vary in length and quality dependent upon the amount donated--to cut out a section of the canvas. They can then keep this section of cut canvas for themselves.

Double Fly, Same Style (2019) features the members of Double Fly Art Center eating, drinking, traveling, practicing, and singing dressed in “pomegranate dresses.” The video, as well as their description of the artwork, criticizes a reality many artists face—that in order to seek funding (particularly “public funding” within the case of China) artists must essentially take on the role of a hostess, subjecting themselves to the wants, whims, and expectations of those with the power to grant funding. The lyrics repeated throughout the video “Big Brother, How Are You?” (Dàgē, nǐ hǎo ma) seems directed at everyone involved in these art world dynamics. It appears as flirtatious beckoning to those who grant funding and at the same time can be seen as vailed, inward facing concern directed at artists, who are in the unenviable position of sacrificing so much for so little funding.

In keeping with a tradition of issuing humorous and mind-boggling artists statements for each of their exhibitions, Double Fly Art Center has issued the following for Double Fly Awkward Pay:

"Double Fly Awkward Pay" is a secret weapon that at long last has been brought to the altar and reluctantly sacrificed, due to the collapse of Double Fly Art Center's public funding. Yet the goal of this project is certainly not to help the public with their funding, definitely not that. We are not Robin Hood. Within the project, Double Fly questions, "How is it that we paint so well, but still don't sell!" We cut a thirty-meter-long artwork that we all created a few years ago into smaller-scale artworks as an attempt to exchange these new works for currency. This kind of action is almost a double negation our own art. We also hope to generate sharp, cutting discourse with the gallery's visitors in a way that it can be summed up as, "credit" + "love" x "wealth" - "talent" = 2.

Double Fly Art Center's slogan this time is: Experience love amidst the wealth gap; become a decision maker in the midst of nothingness!"