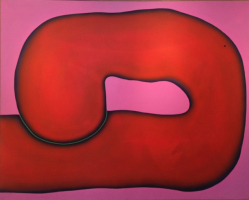 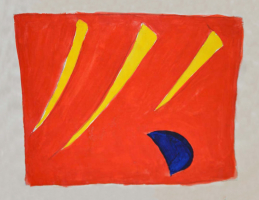 “Do what no one has done before!” --- Jirō Yoshihara

Arising out of a long century of war and conflict, the Gutai Art Association was a seminal group, which sought to challenge the entrenched framework of representative artistic traditions in Japan. The group was co-founded in 1954 by Jirō Yoshihara and Shozo Shimamoto in Ashiya City, a prefecture that was a key target of U.S. airstrikes, and representative of a Japan characterized by emptiness and collective psychological trauma. Under such auspices, the group sought to cultivate unprecedented relationships between materiality, artistic creativity, freedom and modernity. Spanning two generations, the group totaled 59 Japanese artists and sought to evocate the post-war realities of life. The group name “gutai” combines “gu” (technique, instrument) and “tai” (body), literally meaning “concreteness”, to embody the foundational purpose of the group. As declared in The Gutai Art Manifesto, “Gutai art does not change the material but brings it to life. It does not falsify the material. In Gutai art the human spirit and the material reach out their hands to each other”.

The First Generation of Gutai

Kazuo Shiraga fervently challenged mud in a performance and swirled oil paint with his feet, Shozo Shimamoto violently splattered canvases with glass bottles of pigment, while Atsuko Tanaka confronted her audience with flickering neon sculptural clothing. These, attempts exemplify the group’s ethical framework for creative intervention and transformation, visualized in the exquisite collection exhibited this time.

In the 1960s, Chiyu Uemae invented a dense style, where canvases were built on layer upon layer of long, ephemeral impasto brushstrokes, as shown by Untitled (1963). The deluge of long brushstrokes - virtually the sole element of Uemae's painterly vocabulary - pushed his visual motifs toward even greater expressiveness. Gradually the action eliminated the element of color to allow for the greatest scope of expression of ephemeral brushstrokes, experimentation on the very materiality of the practice itself.

The three paintings by Atsuko Tanaka showed in gutai are imbued with complex networks of lines and circles – consistent visual motifs originating from Tanaka’s subversive Electric Dress (1956)，a wearable sculpture composed of colorful neon tubes, light bulbs and electric wires. Collectively, these works echoed the bewildering and rapid technological developments seen in modern urbanity, a theme that was consistently explored throughout her five decades of practice. Work (1963), is defined circuitry, accentuating the interconnected relationships between materials and reality, people and society. The imprints of modernity are further elaborated by the use of new materials, including vinyl paints, resins and enamels, which were only available due to scientific and industrial leaps. The works illustrate the impact of the technological advancements in the Japanese metropolises during the 1970s and 1980s, exhibiting impressions of the Dotonbori district of Osaka where Tanaka came from.

Sadamasa Motonaga was one of the central figures of the Gutai group. His 16 years of engagement highlighted the Gutai’s prototypical motif of balancing the abstraction with Expressionism. Powerful and large-scale since the 1960s, the oeuvre was cemented with highly saturated colors in dynamic tones, of organic shapes and contours. Sen Green (1971) typifies Motonaga's continued ruminations on the possibilities of brush rendering: a vibrant vermillion shape snakes across the horizontal composition filling the opera rose plane, irrevocably slipping to mystic realm. At age 86, Montonaga reflected, “I have not graduated from Gutai’s way of thinking. I still want to do something new, that which has not existed before.”

The Second Generation of Gutai

The original 17 members of the group were joined by prominent artists in the 1960s, and were later hailed the second generation of Gutai. Tsuyoshi Maekawa, one of the influential mentees of Jirō Yoshihara, participated in the 8th Gutai Exhibition, afterwards becoming a group member in 1962. Maekawa’s burlap sacks, were molded cut and reshaped and then with slathered paints, extruding unique tactile sensuality that capture the savage beauty of raw materiality.

After Yoshihara’s death and dissolution of the Gutai group, Maekawa’s work changed dramatically, in opposition to his Gutai-era works, the surface tension became more refined. The two paintings exhibited in gutai were created in 1975, a period where he began sewing very fine thread into fabric, creating a meticulous embroidered image in a monochromatic blue palette. In comparison to his early practice, each composition is measured, calculated and premeditated before a drawn-out and painstaking process of materialization. The resulting artworks consist of recurrent patterns, mindful proportions and simplicity of form, whilst continuing however to focus on discovering new structural and material possibilities, a tenet of Gutai.

The exhibition, gutai at de Sarthe Gallery emphasizes the Gutai ethos that the artist’s mind should not alter the nature of the material in use, but simply imbue into the material his or her concept. Relating to the traditional ideals of Japanese art, the works convey a quiet aesthetic, while allowing the traces of the production process and the quality of material to establish a direct dialogue between the audience and the artwork. With an intimate selection, gutai reawakens this discourse with the contemporary audience inducing theatrical physical sensations, heightening expectations and challenging aesthetic spirits.

For further information please contact the gallery at +852 2167 8896 or at hongkong@desarthe.com