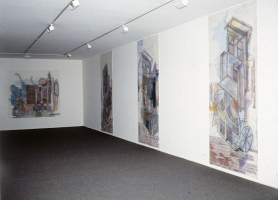 The Pascal de Sarthe Gallery is pleased to present an exhibition/installation by Dennis Oppenheim.

Oppenheim was born in 1938 in Electric City, Washington. He grew up in Oakland, California and was educated at the University of California, Berkeley and Stanford University. He currently lives and works in New York City were he has his first one-person exhibition in 1968. He is an internationally known artist who is represented in numerous museums and private collections throughout Europe and North America.

Oppenheim first attracted national attention in the sixties with his Earth Works. He joined Robert Smithson, Michael Heizer and Walter de Maria in taking the studio outdoors and incorporating art with the natural world.

In 1969, he began doing Body Works, pieces using his body and those of others as a medium of expression – a way of exploring physical, psychic and mental energy.

Since 1972, he has been doing installations. He began by using marionettes as surrogates for the expression of the artist’s emotional states. In the late seventies, Oppenheim’s installations became much more mechanical, making references to factories and machines. These mechanical constructions are meant to be physical manifestations of mental states. They are intended as a visual language which works in conjunction with the artist’s inner being, or as he calls it “the very roots of the mind.”