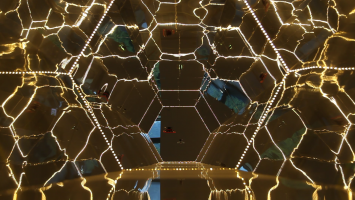 de Sarthe is pleased to announce Ready/Set/Fulfill, a special collaborative project by the gallery’s represented artist Andrew Luk and Samuel Swope, a Hong Kong-based artist and technologist. The exhibition is comprised of new artwork, including sculptural and multimedia installations that collectively form a sprawling drone racecourse throughout and around the gallery space. First Person View (FPV) competitive drone races are scheduled to occur during the course of the exhibition. Ready/Set/Fulfill opens 13 March and runs through 8 May.

The emerging sport of FPV drone racing features prominently both as live performance and as recorded video work. The races advance a conversation about humanity's relationship to speed and progress at large. They exemplify Philosopher Paul Virilio’s concept of “dromology,” (the science or logic of speed), a term he coined positing that the development of society and culture is akin to a race—with the fastest competitor being the most successful. Further still, drone racing also collapses the boundaries between man and machine. As pilots wear immersive VR headsets to pilot the drones via onboard cameras, their vision becomes the drones’ vision and their movements become the drones’ movements. This melding of man and machine manifests the collective desire to transcend our physical, mortal bodies and accelerate towards a more efficient, faster, and cybernetic existence.

Drawing inspiration from Amazon.com Inc.’s patent application for hive-like fulfillment centers, the exhibition also explores the history and future of architecture as well as humanity’s relationship to speed and technological progress. Reminiscent of skyscrapers, Amazon’s proposed fulfillment centers are intended to be the nexus for a colony of thousands of drones delivering packages at a moment’s notice. However, the exhibition addresses not only this vision of the future, but also architecture’s long-held fascination with hives. The thinking of renowned architects like Robert Hooke (1635-1703), Antoni Gaudí (1852-1926), Ludwig Mies van der Rohe (1886-1969), Le Corbusier (1887-1965), the Metabolism movement, and the Archigram group are all referenced within the installation-cum-race course. Artworks double as obstacles for the drone racecourse and include hanging catenary curves, specially designed “Gaudi loops,” and more.

The exhibition is intended to be experienced in two ways—one through the eyes of humans, and the other through the lenses of drones. The drones’ perspective will be live streamed during races and played on loop during regular exhibition hours. Information regarding races may be publicized at a later date, in keeping with relevant Covid-19 prevention measures.

The artists have issued an artist statement for the project, which can be read here:

The internet of our future, in attending to our immediate desires, will lead to a de-accumulation of stuff via higher efficiency and with it will come an increased frequency of consumption and waste output. The fulfilment center of today is a vague location for outsourced inventory and logistics management in the e-commerce process. It involves flotillas of cargo ships, fleets of trains, planes and trucks, armies of robots, and workers in a type of non-stop coordinated unison typical of an insect colony. Tomorrow this colony will be automated and more rapid, and buildings like Amazon Fulfilment Centers will be as iconic as skyscrapers; fully automated architectural wonders, alive with hive-like buzzing and whirring as drones of all sizes land and take off from the thousands of landing pads bolted into the sides of the structures.

A swarm of drones crossing the harbour gently zip across the sky in front of a waning sunset, ensuring your order will arrive in minutes.

In 1675, the scientist Robert Hooke recovered “the true manner of arches for building,” which he summarized with a single phrase: “As hangs the flexible line, so but inverted will stand the rigid arch.” This axiom was used by bees for millennia to build their hives. Each bee grips onto the next, forming a wriggling rope of furry bodies attached to a tree branch at both ends and dangling in the shape of an arch at the middle - forming the catenary curve, the ideal outline for the outer walls of their new hive. Using similar techniques, Gaudi’s upside-down models made of string and fabric accurately determined the curvature of archways and buttresses before construction began. Mies Van der Rohe’s Honeycomb (1921), the first glass skyscraper office building in the world is not coincidentally named. At the time, man-made beehive boxes with panes of glass through which one could view the bees at work were already common. Architecture’s mimicry of hives and honeycombs is an extension of its socio-historical legacy rooted in its ability to impact society; in this context, to create idealistic, utopian, hive-like societies. Le Corbusier’s call for “Architecture or Revolution'' states that architecture would be a sufficient substitute to social upheaval, but also suggests that new society with new architecture is unavoidable. Japanese Metabolist Architecture and to a lesser degree 1970s Archigram, in a similar vein, act as predecessors to the Amazon Vertical Fulfilment Center, consisting of manufactured, repeatable, irreducible units that are “plugged in.” Form is determined only by function.1

In position, arms extended, fingers on controls, eyes absorbing screens: the human being embodies the soaring drone. The mind and the machine are in sync. Movement and data feedback are rendered virtual due to the remote nature of drone operations. And so, the conglomerate, the hive-like Center, the operators, the code, and the semi-autonomous busy drones work together, a hybrid of sorts, to prioritize and fulfill your order. As your package drops gently from the sky, a fantastical techno-utopia promising efficiency and fulfillment begins.

There is an intensity at which technology progressively replaces and augments human beings. In 1977, philosopher Paul Virilio coined the term ‘dromology’, defined as “the science (or logic) of speed.” He compares the activity of racing with society at large, in that what is faster dominates what is slower. And thus theorizing the compulsion to accelerate. In Drone Art, Professor Thomas Stubblefield cites Virilio’s Dromoscopy, or the Ecstasy of Enormities, “since [his] diagnosis forty years ago, not only has the windshield come to merge with the computer screen via ‘head-up displays’ (HUDs) of contemporary automobiles, but so has the screen itself reproduced depthless experience of ‘speed pictures’ in the form of racing simulators and first-person shooters.”2

Competitive arousal as well as the desire to experience flight are both related to our human fascination to overcome our mortal earthly bodies. First person view, or FPV, drone racing culture tends to suggest that the feeling is as if one’s own body is flying. Despite being remotely separated from the drone, the VR goggles provide a window of endless ‘speed pictures’ that “confuse ‘ocular reality’ and its instantaneous, mediated representation.”3 As this new technological sport evolves and expands towards mass appeal, a question arises: Is the colosseum that normalizes and decontextualizes the use of drones as aerial racers also an accelerator that will in due course affect society at large?

Ready/Set/Fulfill uses materials that engage with the imagery on which the current emerging technotopian promise resides. A future of ethereal information clouds, radiant beams of light speed, and transparent air invisibly saturated with signals. Forms take shape as connective tissue, referencing a historical legacy of myths from past hive-based utopias of which the Amazon Vertical Fulfilment Center blueprint is the most recent. Simultaneously, the sculptural work also doubles as an FPV drone racecourse, borrowing the infrastructural language from the emerging e-sport, thereby subjecting itself to both human and machine vision. With each lap around the course, the vision blurs: notions of art, sport, utopia, warfare, and entertainment begin to fuse. The mead as well as the ambiance of the drone is intoxicating. We are in it. The trajectory is total.