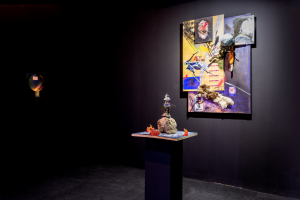 de Sarthe Project Space is pleased to present Qin Lingsen’s first solo-exhibition titled ‘The Theory of Everything’ at the gallery. The exhibition will open on May 13th starting from 4:30 p.m. and will be on view through June 11th, 2017.

Qin Lingsen’s works include paintings, paper collages, multimedia images, installations, ready-made products, and sculptures. As an artist who was born after 1990, he has a great interest in the interconnection between the arts and a variety of subject studies, which can be seen in previous works with compelling representation. Qin tries to use substance other than images to reach other states of non-morphological awareness, and converse with different elements and fragments to divulge feeling into his artwork.

“No longer are shadows of the past embedded within us, rethinking the way in which we apprehend today's world, the universe has totally changed and the uncontrollable ripples of history have constructed the world we are acquainted with today. Changing the way we live, constructing our ideals and expectations, we fathom our ideal.

Eternal recurrence, ambiguity of history, and conspiracy theories have caused variations of the so-called truth. As said by Neil Postman against George Orwell and Aldous Nuxley’s Dystopia theory in Amusing Ourselves to Death, he quoted that Orwell feared the truth being concealed, while Nuxley was worried that the truth would be overlooked in mundane trivials; Orwell was afraid of information being deprived, while Nuxley was anxious that people would become increasingly passive and selfish in theface of huge amounts of information." Unfortunately, both sides seem to be right.

Artists are first the creators of metaphor before they take part in other roles. What I am saying here is, of course, about the greatest possible meaning of metaphor: organizational, behavioral and spiritual metaphor. We create critical metaphors. As Richard Rorty wisely reminded us, we are always embanking metaphors beyond their preservation, and preventing them from becoming as rigid as reality.”