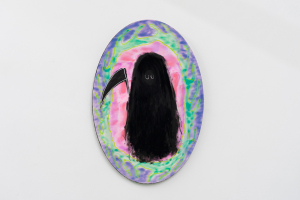 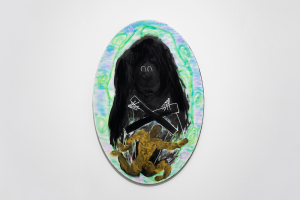 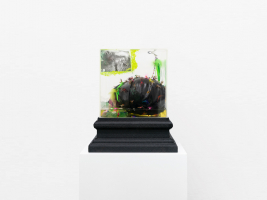 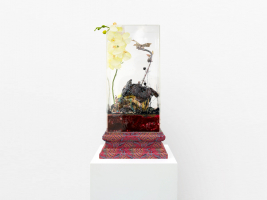 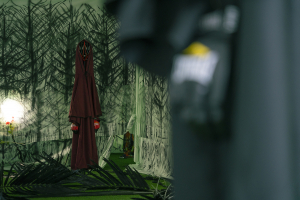 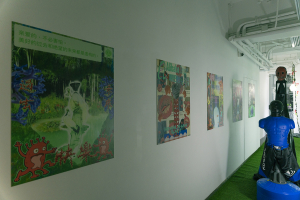 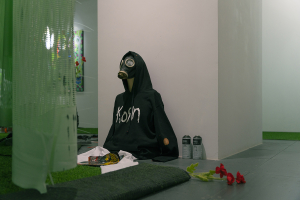 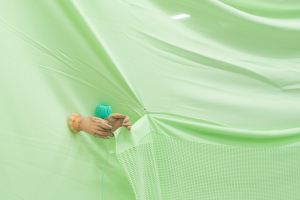 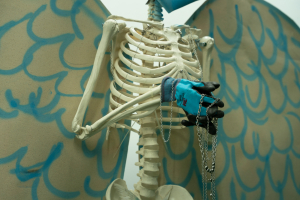 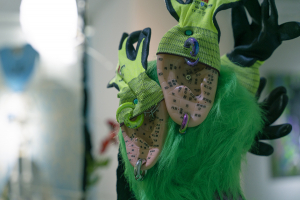 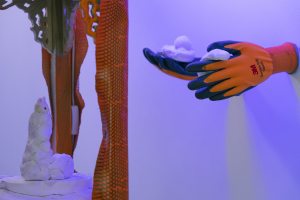 There is a growing existential vacuum in the 21st century, exacerbated by capitalist realism and the technology-driven hyperinflation of information and commodities. Objects and images have been processed through endless cycles of mass reproduction until they are born as but empty vessels, ready to be appropriated and reinvented. Contrasting between the pristinely fabricated nature of found objects and images with the primitive hand, the artist aims to create an overtly fake and artificial environment that displaces its viewers while delivering an intentionally juvenile and primal response against the constructs of artificiality, stimulating tensions between accelerated human techne and primitive desires that result in a hyperbolic statement regarding materialism, spirituality, and the body in contemporary life.

Upon entering the gallery, visitors are immediately confronted by three shadowy figures, blocking entry to the labyrinth. Placed at various points along the path, Chen Pin Tao’s Helmethead and Drumheads 001 are sculptural series that explore the human figure via the reconception of readymade objects. Exercising an object’s infinite potential to be more than itself, the eerily humanoid artworks are composed of easily recognizable items such as bike helmets, MMA boxing gloves, and drum kits. The figures take shape borrowing formal elements from the objects while retaining their common connotations. Charged with the energy of these objects, be it athletic, violent, or sexual, the sculptures become vitalized entities that lurk around the maze.

Navigating through loose branches and hanging vines, the labyrinth reveals a series of works on canvas that embody a similar spirit. Titled Caveman, the finger-painted series comprises illustrations of imagined creatures performing various primitive and unrefined behavior. From depictions of violence, erotica, to fight-or-flight instincts, these artworks appear to mimic the juvenile aesthetic of a child’s drawing. To the artist, the lack of order and inhibition in children’s drawing is symbolic of a raw state of mind prior to the social and moral modifications of adulthood; A representation of humanity in its original form. To the sides, similar drawings on reflective panels portray angels at the top and graphic imagery of suffering below them. Referencing a naive interpretation of heaven and hell, the artist crafts a comment on the often-simplified definitions of morality and its hindrance to primal human desires.

With the increasing accessibility of information technology, there is no longer need for objective truths as selection bias has become a more convenient option. Chen Pin Tao’s Material Prosthetics is a series of sculptures and works on canvas that speculate the fetishization of science and health in the prevailing post-Internet, post-truth era. Using the popularization of health sciences as an example of the phenomenon, the artworks juxtapose clinical imagery of laboratories and pharmaceuticals with romanticized flora, illustrating a cult-like obsession with health as a lifestyle. Hinting at the capitalist commercialization of health, the works not only elucidate the 21st century post-secular religion of science, but poke fun at its lack of factual basis.

Hands, phalli, and various winged creatures, such as birds, moths, and minuscule angelic figurines, are recurring symbols used throughout the exhibition. While the phallus represents Eros and the psychosexual fetishes of modern-day humanity, the hands and winged creatures are references to a meta-narrative built into the design of the space. In its immersive format, the exhibition simulates a Live Action Role Playing game, in which the story is gradually unveiled only as viewers complete the course. As the storyteller, Chen Pin Tao reveals his hand to the viewer through prosthetic limbs and 3M gloves integrated into the artworks. By inserting fragmented insights of his creative process into the experience, the artist generates intersections between the hand itself and the reoccurring leitmotifs directed by the hand of the artist.

If the hands represent the artist, the creator, then the winged creatures must symbolize the viewer, the subject. Both birds and moths are known to fly towards light, despite not knowing where it leads. Placed within the morbid context of the exhibition, these animals suggest an underlying, albeit blind, sense of optimism. The layout of the exhibition is designed such that distant halos of light, emitted from the very end that is visible throughout the one-way labyrinth. As such, visitors must follow the path and gradually move toward the light.

Reaching the final area of the labyrinth, visitors will find themselves surrounded by monstrous, totemic installations. Waiting at the end of the line, Chen Pin Tao’s Seraph is a simulation of The Last Judgement. Referencing the Seraph, a type of angel found in the Christian Bible, the series is comprised of four-meter-tall sculptures dressed in ritualistic tunics, each composed of an animal’s head, an artificial halo, and three pairs of wings. Arranged in a singular row, the council of anthropomorphic entities towers over visitors as they enter into the circle. With recurring depictions of angels throughout the exhibition, the work appears as if bodily manifestations of the previous illustrations. Revealed at the end of the tunnel, the installation attempts to answer the ultimate question vis-à-vis life and what lies after.