Installation view of House of Fortune. 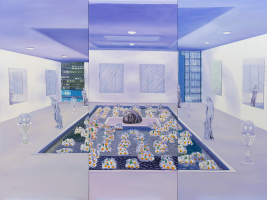 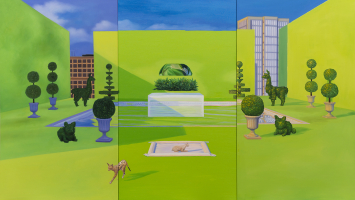 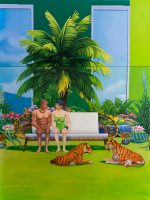 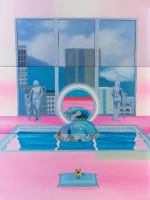 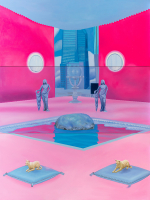 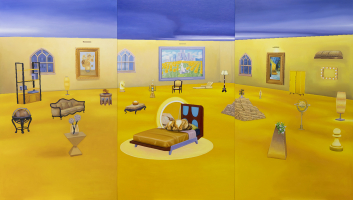 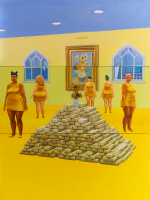 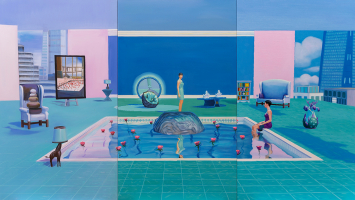 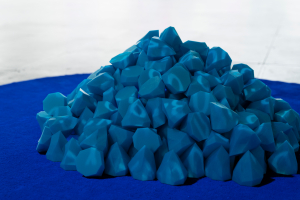 de Sarthe is pleased to present its third solo exhibition for Hong Kong-based conceptual artist Mak2 (Mak Ying Tung 2), titled House of Fortune. Featuring a new body of installations and videos as well as newly developed works from her iconic series Home Sweet Home (2019-), the exhibition contemplates the correlation between value and belief under the context of Chinese Fengshui and big data in the prevailing digital era. Using herself as the subject, Mak2 aims to dis­­sect the criteria of what constitutes and contributes to value while performing individual experiments on the exhibited works. House of Fortune opens on 16 October and runs through 4 December.

Originally named Mak Ying Tung, the artist added the ‘2’ to her name in 2018 after visiting a Fengshui master in the hopes of gaining fame and fortune by perfecting the number of strokes in her Chinese name. The endorsement of her new identity marked the beginning of a self-fulfilling prophecy. Attesting to this phenomenon, the artist sought to maximize the success of her exhibition House of Fortune by seeking affirmation from not only theological but scientific authorities. To streamline the Fengshui master’s prediction made three years ago, Mak Ying Tung 2 shortens her name to Mak2 in 2021.

Mak2’s multimedia installation Feeding the Multitude comprises a heap of 3D-printed crystals and a projected video of running codes. Borrowing the religious belief that Chinese gods bring good fortune, the artist invites a Fengshui master to perform a consecration ritual (Kaiguang) on a digital file that contains the 3D model of a crystal. With the file, the artist prints out a mound of minuscule sculptures, all of which theoretically carrying the master’s blessing. Played on a loop, innumerable codes run from the ceiling down, across the wall, and onto the pile of printed sculptures. The projection consists of codes generated from the crystals’ 3D model file and from the audio recording of the Kaiguang ritual. While the initial ceremony was performed only on the digital file, the notion that its effect will transfer onto any subsequent products suggests that value will exist as long as it is believed as such. By translating the Fengshui master’s blessing into an array of different physical forms and media, the installation alludes to the replicability of faith.

A continuation of her ongoing series, Home Sweet Home: Feng Shui Painting is a sub-series of triptychs on canvas, composed using the popular American life simulation game “The Sims”, with each panel of an artwork painted by a different painter found on the Chinese e-commerce platform Taobao. Using elements of the videogame, Mak2 stages bizarre but idyllic environments that reflect her home city, Hong Kong, projecting into it the unreachable fantasies of real life. She then asks a Fengshui master for spiritual consultation regarding the colors, décor, and positioning of each digital composition. Having optimized the Fengshui, the virtual homescapes are then screen captured, divided into thirds, and sent to separate painters. As the imagery is materialized via paint and brush through the hands of three strangers, the final triptych becomes unpredictable owing to the painters’ inconsistent skill levels, techniques, and use of materials.

The added element of Fengshui in this new sub-series explores the idealization of home through the lens of superstition. By allowing a Fengshui master to intervene in a place as intimate as home, the artist implies the notion of belief over one’s liking. While the original series forms a commentary on the ineluctable disparity between fantasy and reality, the use of superstition in the new paintings speaks to the influence of faith over perception. Utilizing Fengshui properties applicable to both the virtual environments and their resulting triptychs, the artworks are believed to bring good fortune to the exhibition.

Staged amid the paintings, in the center of the gallery, are two isolated islands fully furnished with beds, nightstands, lamps, rugs, and faux wood flooring, collectively construct two cinematic installations in manifestations of ideal bedrooms as imagined by the artist. In the works, Mak2 compares predictive analysis to fortune-telling. Seemly different, the authorities of science and theology respectively represent in the artworks both attempt to foresee the future by building upon existing information.

Clever Calculation I consists of a LED screen implanted into a queen-sized bed, the drawers of which are packed with wires, cables, and various electronic components. The displayed video shows a data scientist calculating the trajectory of the artist’s career using big data analysis. Using data that the artist provided, the calculation naturally results in a positive outcome. With the socio-economic implications of big data, the installation brings forth the idea that the real-life applications of the science may generate the illusion of a self-fulfilling prophecy by guiding its subjects into a cyclical pattern using data mining, selective advertisements, and targeted marketing. Using the bedroom as a symbol for privacy and intimate thoughts, the artwork reveals the interventions of technocapitalism and science.

Clever Calculation II comprises a single bed, one of which has a LED screen embedded in the mattress. The LED screen shows a video of a hired actress playing the role of a Fengshui master. She predicts that the artist will become famous. Contrary to the making of Home Sweet Home: Feng Shui Painting, the video flaunts the artist’s transparent manipulation of the result. Casting the lookalike of a local celebrity Fengshui master, the near-parodic video calls into question the legitimacy of fortune-telling. Mak2 drafted the script based on advice obtained from online fortune telling services, furthering her investigation into digital Fengshui and the co-existence of science and superstition in the 21st-century technological era. A fully orchestrated performance, the artwork advocates the existential notion that so-called prophecies are always self-fulfilling and a result of one’s own will.