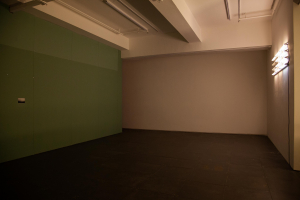 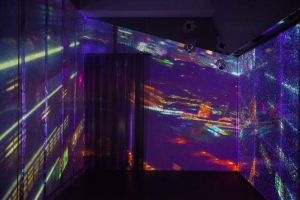 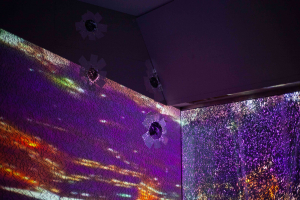 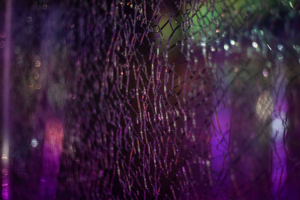 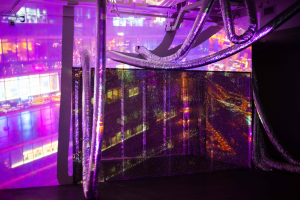 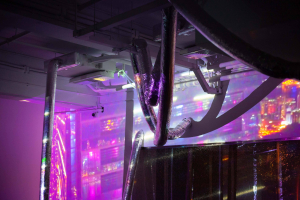 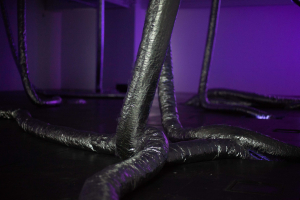 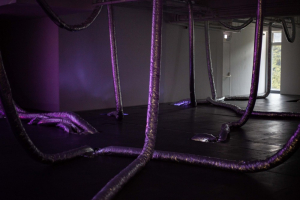 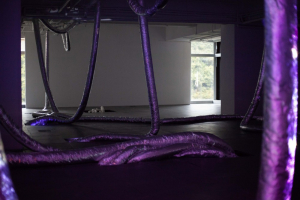 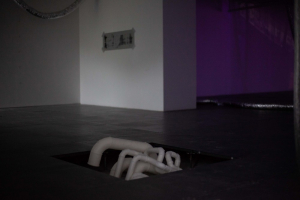 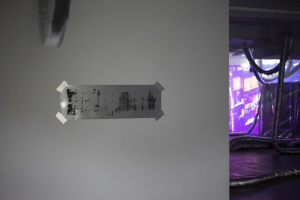 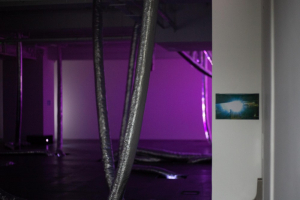 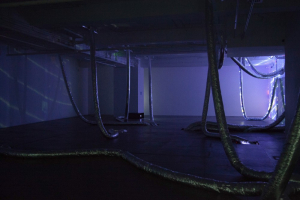 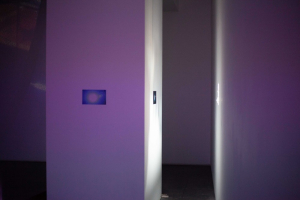 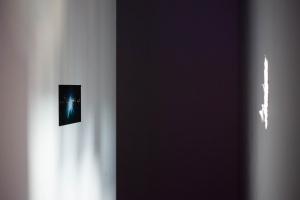 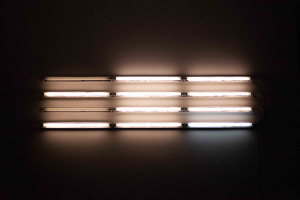 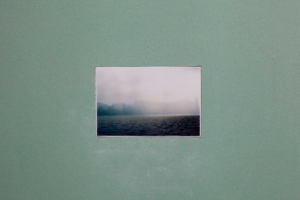 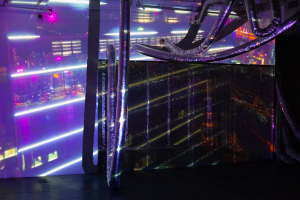 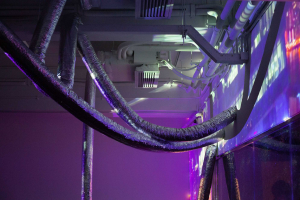 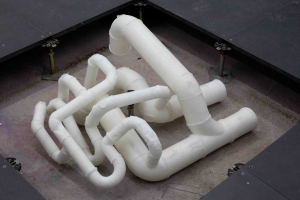 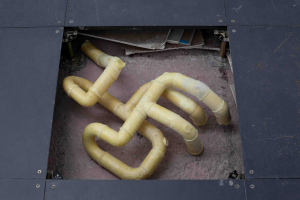 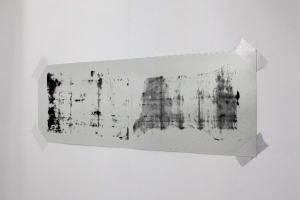 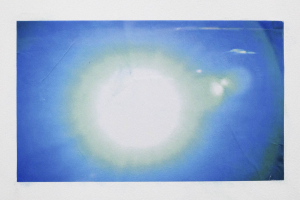 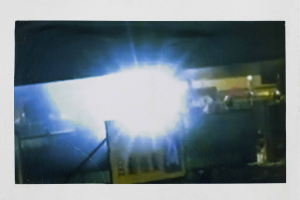 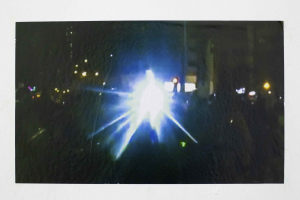 de Sarthe is pleased to present the Hong Kong-based artist Mark Chung’s first solo exhibition, Wheezing, concluding de Sarthe’s fourth annual artist residency (deSAR). Featuring a series of interrelated immersive installations, the developed artworks are based on the artist’s empirical experience of Hong Kong, chiefly during the period of July 2019 to August 2020. The exhibition investigates the various symptoms of systemic dysfunction existent in the city by triggering unexpected sensory reactions through interventions in the gallery and creating immersive cinematic environments for audiences to engage.

Upon entering the gallery, visitors are immediately submerged in a monochromatic environment. Utilizing tube lights with low CRI (color rendering index), Chung’s Ptosis (2020) is an environment in which one can perceive only a limited spectrum of colors. A play on the normative purpose of light, which is to reveal visual information, Chung’s contradictory use of light removes a large swathe of visual information from our field of vision. By doing so, the artist elucidates the limits of our perception and both the exterior and inherent factors that bound them.

Prominently displayed on an otherwise empty wall, Befogged (2020) is a photograph portraying the Hong Kong skyline as seen from the ferry ride between To Kwa Wan and North Point. Heavy fog fills the image, disclosing only vague silhouettes of buildings and mountains. Taken during the heights of the 2019 protests, when the ferries became a substitute cross-harbor transportation for many, the image captures the city as it is shrouded in a mist that fills its streets, an ominous veil muffling the haunted metropolis.

Further into the gallery, Mark Chung’s Growl (2020) is a large-scale immersive installation in which the space is divided into two rooms with opposing temperatures. In one room, flexible aluminum air ducts reach down from the ceiling mounted air-conditioning units. The silver tubes slither and probe their way into a smaller room, redirecting cold air and leaving the larger room to be warm and humid. Comprising a mandatory route, viewers are required to move through the cold room in order to access the warm room. Using air and temperature as a core medium, the installation references the invisible systems, such as water treatment and climatization, that enable our existence within a metropolis such as Hong Kong. Chung likens these utilities to bodily organs such as airways and intestines, which, in their natural flow, function to maintain a life-sustaining cycle.  By disrupting one of these systems, Chung places the viewer in a state of sensory imbalance. A demonstration symbolic of larger issues, Chung’s artwork challenges the problematic systems and normalized dysfunction on which the city operates.

Chung’s multimedia installation Befuddled (2020) comprises a video of one of Hong Kong’s most widely known attractions “A Symphony of Lights”, projected through a cracked glass partition. The artwork looks at the iconic lights and laser show as a bizarre and unnecessary celebration. Taking over the urban skyline, even indirect viewings of its large-scale display become unavoidable. Recorded using a drone, the video shows the performance through a reflection on the glass of the 108-story tall International Commerce Centre. Acting as a screen, a mirror, and a filter, the fractured glass at the center of the installation simultaneously distorts, reflects, and splinters the video, revealing alternative interpretations of the video. Refracting colors across the space while visitors’ shadows further intersect the layers of light and imagery, the staged environment seemingly transcends its physical elements into a phenomenological experience. The transition from one side of the glass to the other – to be bathed in light and then swiftly exiled – additionally creates a sense of instant displacement. The fragmented glass, stained by the projection, parallels the tinted lens through which observations are often made. Looking through the partition, the iconic spectacle that flaunts the flourishing of Hong Kong seems oddly estranged.

Tucked in the corner of the gallery and under the floors are Chung’s sculptural series, Volvulus (2020), which are made of polyurethane casts of PVC pipes. Further investigating the biological and organic characteristics of urban infrastructures, these intertwining forms reference the twisted sewage pipes commonly found on the exterior of buildings that house sub-divided flats. A mutation that developed in order to accommodate rent inflation and overcrowding, these pipes are often clogged and overstressed, producing horrific and nauseating smells. By casting the negative space of the pipes, Chung is reproducing its blockage – the by-product of an impermanent solution symptomatic of a dysfunctional system.

The exhibition’s final work, titled Fugue (2020), is composed of silkscreen prints on galvanized steel plates. The artwork is modeled after a vacant billboard Chung spotted outside the Cross-Harbour Tunnel in Hung Hom – an anomaly in the commercial center of Asia. Without an advertisement, a billboard is reduced to a mere physical existence stripped of meaning and purpose. A visual cavity amid urbanity, the empty billboard seemingly embodies a larger pattern that has swept the city. Streets without people, storefronts without stores – the city has fallen into an indefinite state of suspension. Examining emptiness, Fugue portrays a void in the shape of Hong Kong, and a withering cityscape emblematic of a system in atrophy.